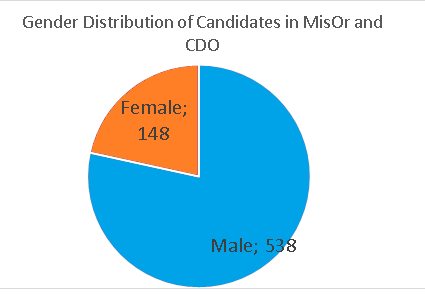 The province of Misamis Oriental in Mindanao is one of the economically important province in the Philippines. It is host to agricultural, forest, steel, metal, chemical, mineral, rubber and food processing
industries and is home to the 30 square kilometre PHIVIDEC Industrial Estate and the Mindanao International Container Port. It is also the location of Del Monte Philippines, the biggest pineapple exporter all over the Asia-Pacific region.

Within the province is the highly urbanized and independent city of Cagayan de Oro (CDO). The city is the regional center of Northern Mindanao and the location of major business establishments and factories in the region.

For the 2019 elections, a total of 686 candidates filed their intentions to occupy the 288 positions in the province and the cities. The number of positions to be filled and the number candidates are as follows:

Except for the First Congressional District of Misamis Oriental, all the districts have three candidates. Only Rolando Uy of CDO’s First District and Juliette Uy of the province’s Second District are seeking reelection. The list of candidates is here.

In the gubernatorial race, Bambi Emano is seeking another term and is facing two challengers. Vice governor Joey Pelaez is stepping down and hopes to be replaced by Jigjag Pelaez. To do so, Jigjag has two face also two contenders.

There are at least two contenders for every seat in the Provincial Board. Eleven will compete in the First District and twelve will also compete in the Second District.

The complete list of candidates for the provincial races is here.

In general, there are only two female candidates in every ten who filed their certificates of candidacies (COCs).

A plurality of those who filed their COCs are from the National Unity Party (NUP) followed by those who filed under Padayon Pilipino (Padayon), the political party of the Emanos.

The administration party — the Partido Demokratiko Pilipino-Lakas ng Bayan (PDP-Laban) – only comprise 12.4% of those who filed their COCs. There are even more independent candidates than those who aligned with PDP-Laban