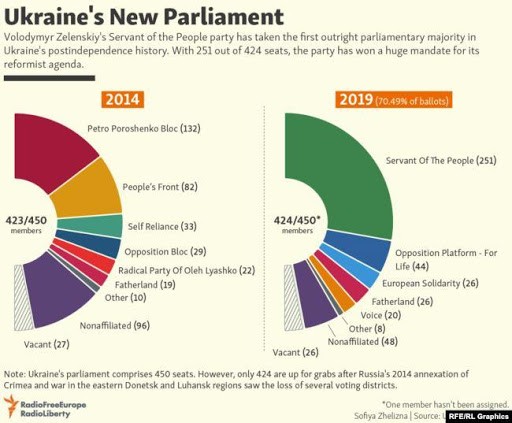 Last Sunday, Servant of the People, the parliamentary party of Ukrainian President Volodymyr Zelenskiy, swept the elections, gaining 254 out of a possible 424 seats. This represents one of the largest parliamentary majorities ever, but with another record low turnout of less than half of potential voters.

This is not surprising, since no left-wing candidates ran, given the past several years of state repression against them, particularly the Communist Party of Ukraine. Another factor is that many more voters are working overseas due to Ukraine’s weak economic situation, even relative to poor Eastern Europe, among whom Ukraine is now the poorest country, with the GDP per capita now lower than Moldova.

Poroshenko’s bloc – renamed after May’s presidential defeat to “European Solidarity”, based on his promise to get Ukrainian closer to EU membership – won only 26 seats from 132 in 2014 (total votes down from 3.4 million to just over 1 million). This again confirms the hatred the Ukrainian people had for his government, as expressed in opinion polls. Even the majorities in his strongholds in the western districts during the presidentials almost all evaporated, although this is still where he got most of his support.

The sad irony is that Zelenskiy’s programme represents a continuation of Poroshenko’s policy of privatisations and austerity in the interest of Ukrainian oligarchs, while bowing and bending to the pressures of US imperialism. This is a line that he has not really strayed from, before nor after the election. In a recent English-language video aimed at Western capitalists, Zelenskiy highlighted his desire to “deregulate” industry and how the potential investors could “make money both internally and externally” from Ukrainians. The external part is clearly aimed at those EU companies currently looking for more Ukrainian migrant workers they can pay a pittance to work in miserable conditions.