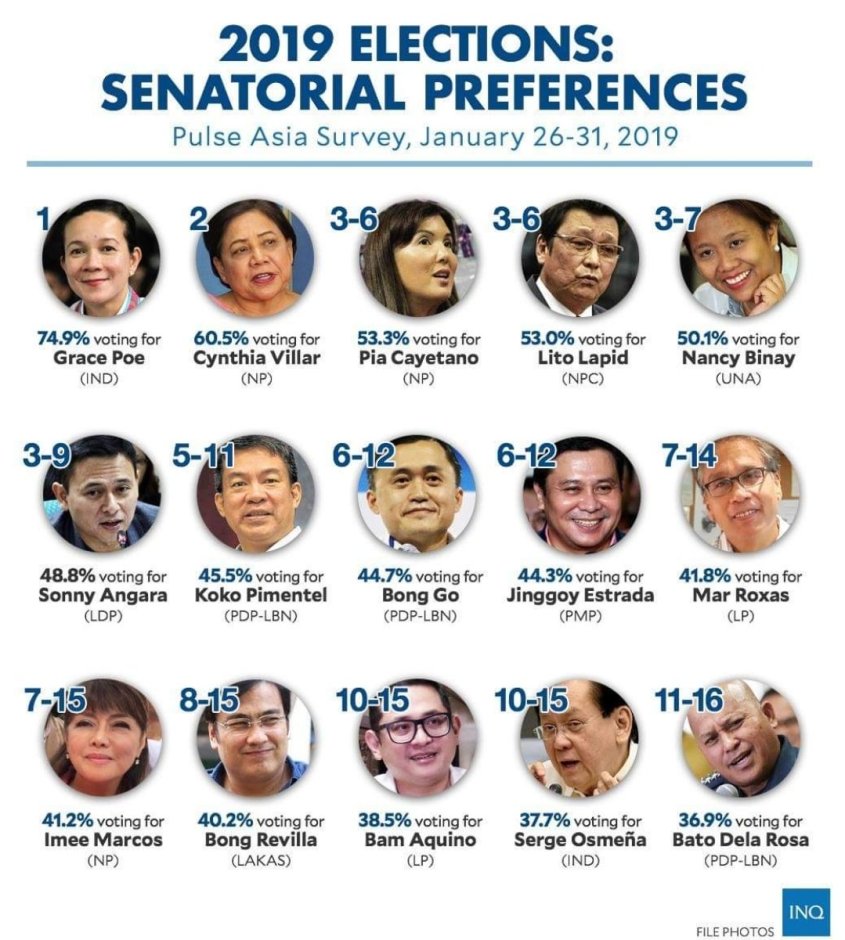 The survey, conducted from January 26 to 31 using face-to-face interview, showed that Poe getting a 74.9 percent voter preference.

Former special assistant to the President Bong Go spends a whopping P422 million for his senatorial bid. The mystery? His net worth as of 2017 is only P12.85 million.

PCIJ compared each candidates’ net worth, as declared in their Statement of Assets, Liabilities and Net Worth (SALN), to the ad placement data of Nielsen Media.

After the senatorial aspirant Ronald “Bato” Dela Rosa biopic was shown in movie theaters, the life stories of two more senatorial candidates endorsed by President Rodrigo Duterte will be presented tonight, February 9, in television. One is the story of Christopher “Bong” Go which will be aired on the longest running drama anthology, Malaala Mo Kaya (or MMK) in ABS-SBN. The other is the story of Francis Tolentino and his experience with Typhoon Ompong which will be aired at Net 25.

Tolentino, on the other hand, earlier served as Mayor of Tagaytay City and became the Chairman of the Metro Manila Development Authority. In 2016, he ran for senator but lost due to the “twerk scandal” when he hired the PLAYGIRLS to perform during his brother’s campaign.

Because of the scandal, Tolentino resigned as MMDA Chairman and removed himself from the Liberal Party in the 2016 elections.

The PLAYGIRLS is a dancers’ group known for their raunchy performance.

For Board Member- First District

For Board Member – Second District

For Board Member – Third District

For Board Member – Fourth District

For Board Member – Fifth District

The filing of candidacies for the 2019 elections revealed a few surprises in the Province of Albay. This is because of the events at the national level that necessitated some realignments at the local level. It should be noted that the 2019 election is a midterm election and will test the public’s support for the Duterte Administration.

Among the surprises is the lack of contenders for mayoralty post in at least six towns with two or three more having only token candidates. Another is the assumed return of Cong. Joey Salceda to the provincial government. This is his ticket to the Regional Governorship  should Federalism pushes through. Instead, Salceda sought re-election as Representative for the Second Congressional District.

END_OF_DOCUMENT_TOKEN_TO_BE_REPLACED

The 2019 gubernatorial elections in Camarines Norte is a rematch between incumbent Governor Edgardo Tallado and former Congresswoman Catherine Barcelona Reyes. In 2016, after battling sex scandal that caught national attention, Tallado edged out Reyes with a 2.3% vote-margin or around 5,000 votes. Will the rematch lead to Tallado’s re-election?

The full list of candidates for the provincial posts of Camarines Norte are as follows: