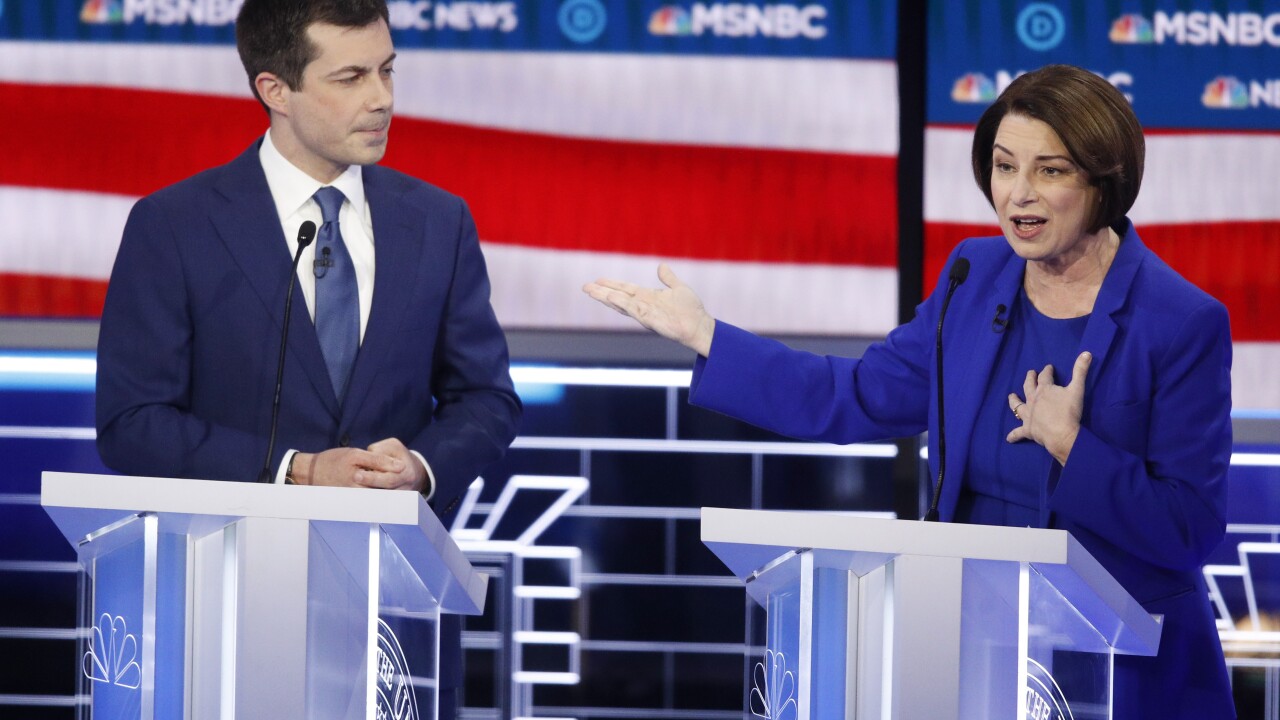 The field of Democratic presidential candidates was historically large, but many have now dropped out.

There are currently five people running for the 2020 Democratic nomination. President Trump picked up a couple of Republican challengers — all but one have ended their campaigns. Below, an accounting of who’s still in and who’s out.

RunningJoseph R. Biden Jr., 77Former vice president; former senator from DelawareDemocrat“If we give Donald Trump eight years in the White House, he will forever and fundamentally alter the character of this nation, who we are, and I cannot stand by and watch that happen.”

Has run for president twice before.

Is known for his down-to-earth personality and his ability to connect with working-class voters.

Regards 2020 as his last chance to run for president.

Check out Joe Biden’s candidate profile page »Michael R. Bloomberg, 78Billionaire media executive; former mayor of New York CityDemocrat“Defeating Donald Trump — and rebuilding America — is the most urgent and important fight of our lives. And I’m going all in.”

Recently reversed his longstanding support of the aggressive “stop-and-frisk” policing strategy that he pursued for a decade while he was mayor.

Has flirted with mounting a bid for president for more than a decade.

Re-registered as a Democrat in October 2018, nearly two decades after he left the party to run for mayor as a Republican.

Has voiced stark disagreements with progressives on issues including bank regulation, stop-and-frisk police tactics and the #MeToo movement.

SIGNATURE ISSUES: Has been an outspoken voice on gun control and climate change, but his views on taxes would put him on the conservative end of the Democratic field.

Tulsi Gabbard, 38Congresswoman from Hawaii; Army National Guard veteranDemocrat“There are a lot of challenges that are facing the American people that I’m concerned about and that I want to help solve.”

Supported Bernie Sanders in the 2016 primaries.

Has drawn condemnation for meeting with Syria’s president, Bashar al-Assad, whose regime has been accused of using chemical weapons against civilians.

Has apologized for her history of anti-gay statements and her past work for an anti-gay advocacy group.

SIGNATURE ISSUE: Opposition to American military intervention overseas, including in countries like Syria.

Check out Tulsi Gabbard’s candidate profile page »Bernie Sanders, 78Senator from Vermont; former congressmanDemocrat“The only way we will win this election and create a government and economy that work for all is with a grassroots movement — the likes of which has never been seen in American history.”

A self-described democratic socialist, has brought progressive proposals like Medicare for All and tuition-free public college to the forefront of the race.

Was the runner-up in the 2016 Democratic primary.

SIGNATURE ISSUES: “Medicare for all,” free college tuition and curtailing the influence of “the billionaires.”

Check out Bernie Sanders’s candidate profile page »Elizabeth Warren, 70Senator from Massachusetts; former Harvard professorDemocrat“It’s time for women to go to Washington and fix our broken government, and that includes a woman at the top.”

Speaks frequently about the need for “big, structural change.”

Has released a wide range of detailed plans that together have the potential to reshape the economy.

“I have a plan for that” has become her rallying cry and a T-shirt slogan.

SIGNATURE ISSUES: Income inequality and what she sees as a middle class under attack from big corporations and political corruption.

Check out Elizabeth Warren’s candidate profile page »Donald J. Trump, 73U.S. president; real estate developer; reality television starRepublican“Considering that we have done more than any administration in the first two years, this should be easy. More great things now in the works!”

Has focused on undoing the policies of the Obama administration, including on health care, environmental regulation and immigration.

The political parties in the United States (US) are more active than ever as they choose their nominees for the November 2020 general elections. But, unlike in other countries, candidates are chosen through a series of caucuses and primaries that will determine voters’ preference.

Caucuses are small private gatherings of political party members where they nominate, or elect nominees, for the upcoming elections. These gatherings may be in churches, schools, libraries or even members’ private homes to allow the party members openly express their preferred candidate. If any candidate gets under 15% of the vote in any caucus, their supporters then get to pick a second choice from among the candidates who did get more than 15%, or they can just choose to sit out the second vote.

A primary is a system developed by US political parties over time. Under this system, the government establishes booths that the citizens can visit and choose a candidate they want to run in the general election for a specific political party.

Just like the caucus, a primary is a process that narrows down the number of candidates in an upcoming election. But unlike a caucus, a party member may just tun-up anytime at a government-designated booth, write in a ballot his nominee of choice, and leave. There are no deliberations, whatsoever.

There are two types of primaries and these depend on the rules of the State — the closed primary wherein only registered members of a political party are allowed to vote or choose their nominee, and the open primary where voters, regardless of their political party affiliation, can vote or choose or a nominee for his own party or another party. An example of the latter is that a Republican voter may request for a ballot for the Democratic Party and choose a candidate that he/she thinks can represent the Democrats.

Technically, “primary voters are not voting directly for a candidate even if, on paper, that’s what seems to be happening. Instead, how they vote determines how each state’s delegates are divided up among the candidates during each party’s nominating convention. The delegates are actually the ones who choose the nominee.”

Caucuses and primaries are not part of the US Constitution. Practice, however, made it part of the political process to narrow down the number of candidates in US elections.